SHOCKING!!! As South-South Youths Says We Are Biafrans 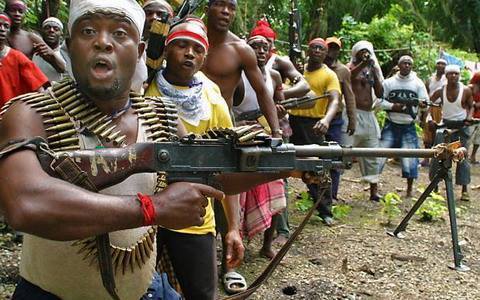 SHOCKING!!! AS SOUTH-SOUTH YOUTHS SAYS WE ARE BIAFRANS.


Oh! my fellow youths of South south and South East, why the media attack on each other because of Biafra? Have you forgotten that this is exactly what the greedy parasites and traitors want? We don’t need to fight ourselves because, whether we like it or not one day we will surely be called BIAFRANS! Let me address the South South wing because I am a proud son of the South South. It is laughable that we the people of South South keep saying that we are not happy with the way the Hausa/ Fulanis are treating us, but still we are not Biafrans.

We want Niger Delta Republic? Hahahahahahaha please forgive my laughter, i laughed because there is no such thing like Niger Delta Republic, it has not been established anywhere or recognized by anybody. If at all anything like that would exist, it will emanate from the discussion between the South South And South East upon the realization of Biafra and not from the present Nigeria. I said so because, we are equal with the South East virtually in every aspect, they will not marginalize us because they cannot marginalize us the way these parasites are doing, we match the South East in military power, economically and population. My people, it is completely baseless to think that the Igbos would marginalize us in a new country.
All we(SS and SE) need to do is to unite and energize to wrestle our freedom from these parasitic demons. I am sounding like this because i am fully convinced that secession crises that will lead to war is inevitable in this country, though i would have wished for a peaceful and credible referendum. We the people of South South need to state clearly where we belong, and we don’t need to make the same mistake we made in the past. How can we and some parts of the South East will be sustaining the whole country, still they regard us as inconsequential and second class citizens? Let us be wise and identify with our Igbo brothers and sisters who mean no harm but love for us. It is too bad that we the South South people are ludicrously contemplative, we already know that these parasites hate us, and they are only saying “one Nigeria” because of our oil, but we are still skeptical and cynical about the harmless Igbos.
We better wake up before it’s too late. I just hope our fate would not be that of Hamlet in William Shakespeare’s Hamlet, that got all the convincing signs that Claudius his Uncle killed his Father, but he was still looking for more signs to believe beyond all reasonable doubt, and that indecision led to his death. (I chose to summarize the play in past tense and not progressive tense as required of a synopsis of a theatrical piece). In case you are not aware of the signs that they don’t mean well for us, let me help you with some. -The killing of Ken Saro Wiwa after he helped them to drive the Biafran soldiers out of Rivers state and it Environs. -The blocking of our agitation of resource control at the 2005 National Political Reform Conference. -The blocking of the agitation of increment of Derivation by our people in the just concluded National Conference. -The stiff opposition they gave the PIB that would have given 10% oil proceeds to host communities in our region. -The deliberate and malicious attacks on Jonathan and his aides from our region, while those from their region are being exempted from the attacks. If after doing all these things and many more to us, and some us still see the Igbos as our enemies instead of them, then i regret to say that there is something fundamentally wrong with our thinking faculty.
We call these parasites poor and illiterate, yet they are able to manipulate us to hate and fear Igbo people, then they crept in to subvert our will and control our resources. Just imagine, poor and uneducated masters to Rich and educated slaves? Gosh! So strange, i really need to do a thorough research to know how to describe such slavery and to ascertain if such slavery has ever existed anywhere before.
Let me end my piece with this unguarded statement by Ahmadu Bello. “The new nation called Nigeria should be an estate of our great Grandfather Uthman Dan Fodio. We must ruthlessly prevent a change of power. We use the minorities in the North as willing tools and the South as a conquered territory and never allow them to have control over their future”–Ahmadu Bello, 12th October, 1960
Let’s tell them the truth: we don’t want resource control, we don’t want PIB, we don’t want derivation, what we want is BIAFRA!.

Please What Are Your Comments?
Posted by Unknown at 08:34