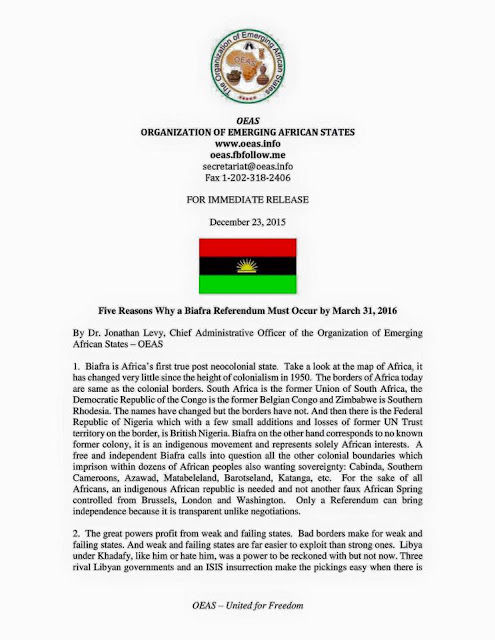 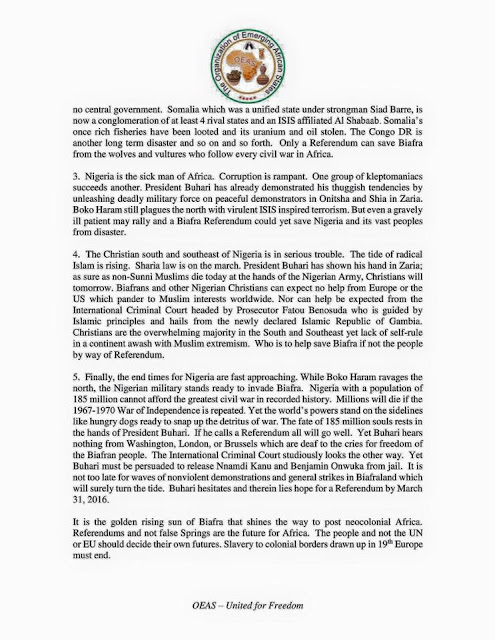 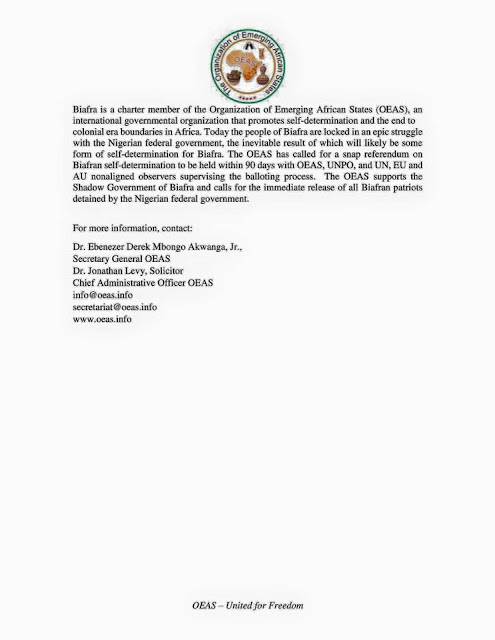 Organization Of Emerging African States (OEAS) Gives The Nigeria Government And Buhari A Final Warning On Nnamdi Kanu And Biafra.

On 22 December 2015.
Organization of Emerging African States is given Nigeria and admistration of buhari a final warning on

Nnamdi Kanu he has not been released from jail.

OEAS calls for general strikes in Biafraland. The time for Referendum is now. We therefore amend our latest statement as follows:
Five Reasons Why a Biafra Referendum Must Occur by March 31, 2016
By Dr. Jonathan Levy, Chief Administrative Officer of the Organization of Emerging African States – OEAS
1. Biafra is Africa’s first true post neocolonial state. Take a look at the map of Africa, it has changed very little since the height of colonialism in 1950. The borders of Africa today are same as the colonial borders. South Africa is the former Union of South Africa, the Democratic Republic of the Congo is the former Belgian Congo and Zimbabwe is Southern Rhodesia. The names have changed but the borders have not. And then there is the Federal Republic of Nigeria which with a few small additions and losses of former UN Trust territory on the border, is British Nigeria. Biafra on the other hand corresponds to no known former colony, it is an indigenous movement and represents solely African interests. A free and independent Biafra calls into question all the other colonial boundaries which imprison within dozens of African peoples also wanting sovereignty: Cabinda, Southern Cameroons, Azawad, Matabeleland, Barotseland, Katanga, etc. For the sake of all Africans, an indigenous African republic is needed and not another faux African Spring controlled from Brussels, London and Washington. Only a Referendum can bring independence because it is transparent unlike negotiations.
2. The great powers profit from weak and failing states. Bad borders make for weak and failing states. And weak and failing states are far easier to exploit than strong ones. Libya under Khadafy, like him or hate him, was a power to be reckoned with but not now. Three rival Libyan governments and an ISIS insurrection make the pickings easy when there is no central government. Somalia which was a unified state under strongman Siad Barre, is now a conglomeration of at least 4 rival states and an ISIS affiliated Al Shabaab. Somalia’s once rich fisheries have been looted and its uranium and oil stolen. The Congo DR is another long term disaster and so on and so forth. Only a Referendum can save Biafra from the wolves and vultures who follow every civil war in Africa.
3. Nigeria is the sick man of Africa. Corruption is rampant. One group of kleptomaniacs succeeds another. President Buhari has already demonstrated his thuggish tendencies by unleashing deadly military force on peaceful demonstrators in Onitsha and Shia in Zaria. Boko Haram still plagues the north with virulent ISIS inspired terrorism. But even a gravely ill patient may rally and a Biafra Referendum could yet save Nigeria and its vast peoples from disaster.
4. The Christian south and southeast of Nigeria is in serious trouble. The tide of radical Islam is rising. Sharia law is on the march. President Buhari has shown his hand in Zaria; as sure as non-Sunni Muslims die today at the hands of the Nigerian Army, Christians will tomorrow. Biafrans and other Nigerian Christians can expect no help from Europe or the US which pander to Muslim interests worldwide. Nor can help be expected from the International Criminal Court headed by Prosecutor Fatou Benosuda who is guided by Islamic principles and hails from the newly declared Islamic Republic of Gambia. Christians are the overwhelming majority in the South and Southeast yet lack of self-rule in a continent awash with Muslim extremism. Who is to help save Biafra if not the people by way of Referendum.
5. Finally, the end times for Nigeria are fast approaching. While Boko Haram ravages the north, the Nigerian military stands ready to invade Biafra. Nigeria with a population of 185 million cannot afford the greatest civil war in recorded history. Millions will die if the 1967-1970 War of Independence is repeated. Yet the world’s powers stand on the sidelines like hungry dogs ready to snap up the detritus of war. The fate of 185 million souls rests in the hands of President Buhari. If he calls a Referendum all will go well. Yet Buhari hears nothing from Washington, London, or Brussels which are deaf to the cries for freedom of the Biafran people. The International Criminal Court studiously looks the other way. Yet Buhari must be persuaded to release Nnamdi Kanu and Benjamin Onwuka from jail. It is not too late for waves of nonviolent demonstrations and general strikes in Biafraland which will surely turn the tide. Buhari hesitates and therein lies hope for a Referendum by March 31, 2016.
It is the golden rising sun of Biafra that shines the way to post neocolonial Africa. Referendums and not false Springs are the future for Africa. The people and not the UN or EU should decide their own futures. Slavery to colonial borders drawn up in 19th Europe must end.
Biafra is a charter member of the Organization of Emerging African States (OEAS), an international governmental organization that promotes self-determination and the end to
colonial era boundaries in Africa. Today the people of Biafra are locked in an epic struggle with the Nigerian federal government, the inevitable result of which will likely be some form of self-determination for Biafra. The OEAS has called for a snap referendum on Biafran self-determination to be held within 90 days with OEAS, UNPO, and UN, EU and AU nonaligned observers supervising the balloting process. The OEAS supports the Shadow Government of Biafra and calls for the immediate release of all Biafran patriots detained by the Nigerian federal government.
For more information, contact:
Dr. Ebenezer Derek Mbongo Akwanga, Jr.,
Secretary General OEAS
Dr. Jonathan Levy, Solicitor
Chief Administrative Officer OEAS
info@oeas.info
secretariat@oeas.info
www.oeas.info

Please What Are Your Comments?
Posted by Unknown at 06:09