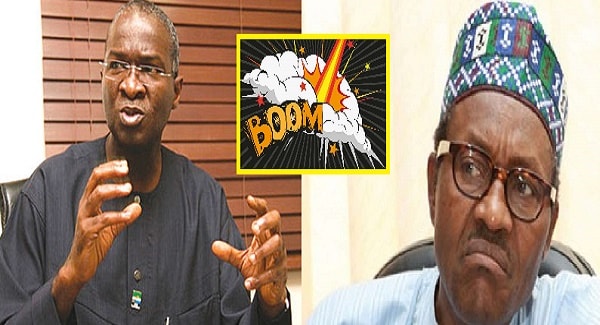 The former Lagos state governor and current Nigerian Power, Housing and Works Minister, Mr Babatunde Fashola revealed that President Muhammadu Buhari was one of those that looted Nigeria treasury in the past and and reitreated that he is back in office doing the same thing again.

Mr Babatunde Fashola stated this at a town hall meeting held earlier this week in Abuja, the Federal capital territory.

According to Fashola, “between 1979 and 1983 when I was in School, Nigeria had a lot of money in reserve. There was nothing we couldn’t buy, but by end of 1984 the money was gone and this led to recession in country.

Checking the Nigerian history books, General Muhammadu Buhari was military tyrant in office between 1983-1985, when all the money Fashola was talking about disappeared from the treasury and starvation took over the nation.
Forward to 2015: Nigeria was not in recession as at May 2015 when President Muhammadu Buhari ingloriously became president, as the country was the 3rd fastest growing economy in the world according to Bloomberg, CNN Money, World Bank and other international financial institutions.

Nigeria in 2013 and 2014 had excess food produced by the new dry season and normal farming policy of the Transformation agenda and Strategic storage Devices were built to store foods for emergencies and period of war.

Now, a little forward to 2016: All the National goodies are gone and we now have recession. The agriculture policy was killed, fertilizer sales given back to party leaders and ex-military generals, 2015, 2016 budgets looted by Buhari and his cronies. There is no trace of the N10.5 trillion budgeted for the above two years and no particular project can be traced to it.


Email: rowlandlove2015@gmail.com
To Advertise On Our Website,
Rowland Gate Media Editorial World.
Let Us Know What Your Comments Are ?