AN OPEN LETTER TO THE CHILDREN OF LIGHT WORLDWIDE 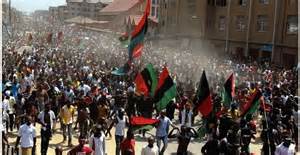 AN OPEN LETTER TO THE CHILDREN OF LIGHT WORLDWIDE.
BY CHRISTIAN ROWLAND.

The meaning CHI, points to God, the biafrans are the children light which is the light of God. And they have a covenant with God. The children of God are the children of light, and the light is the sun which is the strong light in the world, which points to the rising sun, the sun is the light of God. The is the most powerful light in the world. This is only if most igbo's know who they really are, they will change their mentality of doing and seeing things, it is funny that the igbo's and the so called south-south don't really know who they are, while some have even forgotten who they truly are really, while the yoruba's and hausa knows who you really are more the igbo's know themselves so how come then ?
when the white men first came into africa, they asked the northern's who we are because we were far advanced than others , so they told the white men that we are the ancient
people that migrated from the far east, the israelites. the so called south-south have been brain washed by the evil divide and rule british nigeria deceit, the so called south- south name their 1st daughters (ada) like the igbo's do, and their lady's and wife's dresses like the igbo's do, their market days answer eke, and oye like the igbo's do, their son's still answer chibuike ,amaechi, emeka,chidiebere and
ebere jonathan like the igbo's do, so why do the so called south-sooth keep lieing to them self's that they are not igbo's ? so now tell me who is fooling who ? just because of crude oil. i want to open the eyes of many people today, do you know that the solid minerals in anambra state alone is

5 times bigger than delta state and cross-river put together ? do you know that anambra state is sitting on
100years of gas before the main crude oil enugu state alone has excess gas wasting in the east, go and ask and they will tell you, do you also know that enugu state coal can power the whole nigeria power supply for a 100years without blinking for a day ? let me just stop here because you will be so shocked if i keep going on. the reasons why the nigeria government called you the so called south-south
or (niger-deltas). It was to isolate you from your senior brother's who could
protect you just, so they could suck the oil in you own land. i don't think the so called south-south now have read the history of your father's or as if they even didn't learn anything from how the british killed all their father's and enslaved them, and also the nigeria government as well. Go and do research and see for your self's. all just for the control of the sale of red oil then, how couldn't the so called south-south have learnt anything from their father's
mistake, how could they be repeating the same mistakes and same thing their father's all died for making. only fools will do such twice. do you think the nigeria government don't know what the igbo's has in their lands ? you will be so shocked they even have more resources but the yoruba's and hausa fulani's knows that igbo's are smart, and cannot be fooled into collecting peanut's like they are doing to the so called south-south today. secondly this brings us to my main annoyance and the foolishness of the igbo's, who are the true igbo's ? why will an igbo man call his father's home and house, village and go to a piece of land surrender by water a (lagoon ) called lagos, a glorified gettho, and abuja a
( desert) a home for wondering and lost spirit, that was transformed to a glorified state capital, and then call it a township... and then start building expensive buildings there. Oh my god!!!! only a mad man that is caused, and who will do such a thing, it is only those who were caused by the spirit of the
dead, the souls of the 6,3 million biafrans that died during the biafra/ nigeria war ,who hasn't been put to rest until biafra is been restored. now the so called south-south have now known that they are more biafrans than the igbo's, because they actually gave us that name ( biafrans) the igbo's, south-south and every biafran, must now stand up and make sure they restore biafra, the blessed land. it has happened before then in egypt, when Moses wanted to take the 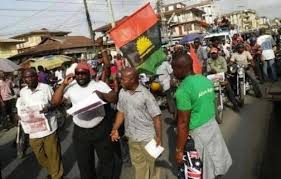 children of god out of egypt ,they told Moses so we will all leave our investments, houses, chieftains title, there in Egypt and go back home and Moses told they yes that they must do that, and that was gods commandment, because the children of god the israelites, had already lived in egypt for 400years, they even developed egypt for them, as slaves now take a closer look at nigeria today and you will see the igbo's are those who really developed it,but yet they are been treated like slave because nigeria is not their homeland. remember the israelite's had the biggest houses, then in egypt, the best technology, they where very good builders, they even built the pyramids of today in egypt, so that was why the egyptians and pharaoh didn't want the israelites to go just like what is happening now in nigeria, remember the igbo's are children of(gad) one of the missing tribe of the israelites 12 tribes. the hausa fulani's and the yoruba's don't want the igbo's and the south-south to go, but some igbo fools are still looking back at their investment in lagos and in the north. you have already been told to mortgage your houses
it still belong to you, and relocate you investments back home, some fool are still deaf and looking back, but remember what happened to lots wife when she refused to listen and turned back, she was became a pillar of salt. we must leave lagos and abuja... and return back home, we must do so to safe guard our
future and the life's of our children unborn, or we will all die in the hands of our enemies. there has been an uncovered massive plan by the yoruba's and the hausa fulani's to islamize the country called nigeria and destroy the igbo's and their investments and their importations businesses. god is now talking and speaking to his children and he also does so before he allows bad things to happen. 99% of the so called men of god in the zoo called nigeria won't want to say anything because they are all worshiping money now (the god of money) and this will affect their church business if they tell you.. and south-east and south-south governors 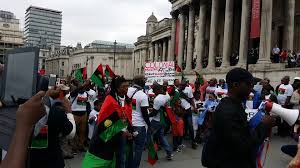 are all interested in their monthly 600 million security vote a money they get from the government to sell the future of their brother's and for all those fooling you that buhari is building and engineering nigeria, just ask them, these simple questions , when buhari was in power then ,what change did he bring then , apart from been a tyrant ? and the same thing is till happening now, buhari has released all the boko-haram and putting them in the police and army and also deploying then into the south-east and south-south to be killing the igbo's and south-south everyday. there is none of the nigerian army or policemen in the north now to even fight boko-haram ask and you will be told. so tell me who is fooling who about change ? things just got worst. the main truth why the yoruba's put buhari into power was to make sure that nigeria don't break-up open your eyes igbo's and south-south and be smart.
Americans predicted that the biafrans will have their freedom by 2015 and the yoruba's didn't want that, so theydecided bringing in buhari into power, it wasn't a mistake or an accident. buhari was brought into power by the yoruba's to stop the igbo's from having their freedom, it was a masterminded plan by the yoruba's like coupé that has always planned and done in nigeria where all planed by the yoruba's and assisted by the hausa fulani's so don't be fooled that buhari will do anything, you can see he is now the most traveled president in the world in 6 months alone
while his country is on fire. Don’t also be fooled the only thing buhari came to do is to stop the south-east and south- south biafrans from having their freedom. you can see he
now fooling nigerians that he is busy looking for investors so why did he take him 5 months to appoint his friends the ministers the same friends who helped rigged him into power same old thief's, if investor's was very important to him ? the investors should be left to be found by the ministers he appointed what does buhari know about economy what qualification does buhari ha to drive an economy of a nation please if anyone knows, he should please tell us , s tell us has buhari now probed any of the yoruba and northern thief's or the hausa fulani's, who stole billions from the country ? no. when buhari came into power, buhari said obasanjo, and ibb are all innocent and angel. only in nigeria thief's are called
holy saints and angels. he said they have never stolen any money from the government infact tinubu the lagos biggest money robber is his closest friend and allie they even eat and chart together on the same table, why ? because they are all muslims.... you father's couldn't fix nigeria for 100years because they were just 3 different nations brought together by the british to do trade to favour their personal interest. they where all tricked that they needed a trading license to do bigger trading business with the outside world and international market, that was the british created the fraud called nigeria. there is no hero in the zoo so called nigeria, nigeria have no heroes like they sing in their national anthem go and research all the so called nigerian heroes where all killed , only the evil ones and devils incarnate has been ruling nigeria and that is why nigerian will never work.ken saro, killed mulitala, killed fele kuit killed he didn't die of hiv, obasanjo killed him with an unknown poison because he saying all the evil obasanjo was doing, go ask fele's even brother who is a medical doctor, fele's mother, killed she was thrown down from a 3 story building by obasanjo, dele giwa, killed abacha, letter bombed him, aguiyi eroisi, killed, he was killed by the the genocide gowon, you can keep naming them till tomorrow morning, all the heroes,killed. the only man the nigeria government couldn't kill was the true biafra hero chukuemeka odimegwu ojokwu the biafra warlord. because he was smarter than all the yoruba's and hausa fulani's put together. so i say you all true biafrans be wise and smart like ojokwu, don't be used by the zoo nigerian government because at the end you will be killed or dumbed. be warned, and now you are already warned, start acting before it is too late. remember nnamdi kanus words this is was what saw and started shouting to all biafrans all over the world, is it either Biafra or death. this was how he opened the eyes of all the south-east and south-south and millions biafrans around the globe. A word is enough for the wise, he who has ear let him hear what the spirit says to the church.
( biafrans come back home, relocate your investments and fight for your freedom). 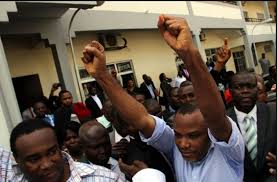