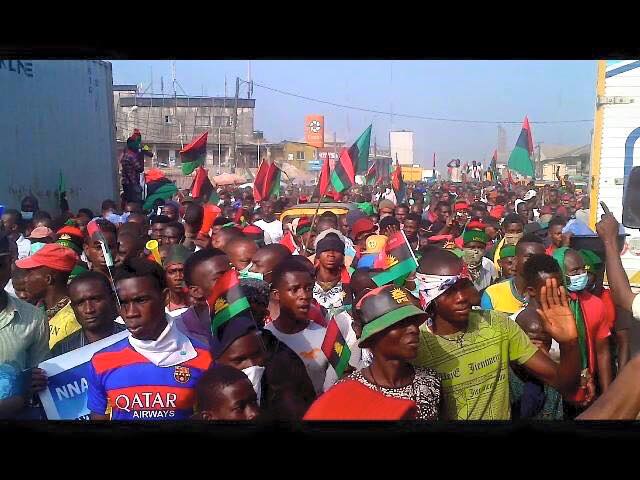 AFTER a few days of respite, the protest train of the Indigenous People of Biafra (IPOB) left the southeastern states and berthed in Lagos, storming Alaba International Market, Ojo local council, and halting movement and economic activity, which lead to a severe gridlock in the area.
Swinging their trademark Biafran flag of red, black and green colours with a golden crest of the rising sun in the middle, hundreds of youths in their mid 20s and 30s, all clad in black and chanting solidarity songs, called for the immediate and unconditional release of Radio Biafra Director and leader of IPOB, Nnamdi Kanu.
Repeatedly, leaders of the pro-Biafra movement were quoting Chief Odumegwu Ojukwu’s famous words: “Nothing can crush the will of a determined people,” while calling on the Federal Government to as a matter of urgency constitute a Biafra referendum, which they claim istheir inalienable right.
However, a Magistrate Court sitting in Abuja yesterday discharged the cases against Nnamdi Kanu. At the ruling, the chief magistrate, Shuaibu Usman, struck out all criminal charges leveled against Kanu. Usman said since the State Security Services (SSS) through its lawyer, Moses Idakwo, had filed for a discontinuation of the case, the accused is thereby discharged. 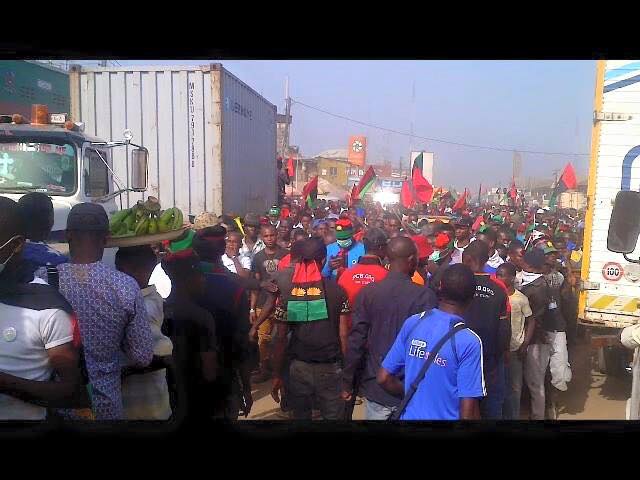 The group had on Tuesday disclosed that it will hold its mega rally along the Alaba International Market axis, as well as visit several embassies and High Commissions, the Amnesty International and United Nations offices, in Victoria Island and Ikoyi, to deliver their protest letters.
Reacting to the notice, the Lagos State chapter of the All Progressives Congress (APC) issued a warning to members of MASSOB and IPOB who were plotting to hold protests in the state to perish the thought.
The party’s spokesman, Mr. Joe Igbokwe, had urged those planning to stage the protest to discontinue it, as the state will not tolerate any breakdown of law and order.
The Lagos State governor, Akinwunmi Ambode, also took to his Twitter page to state that the state will deal with anyone who attempts to breach the peace. “We must put together our resources and stand firm in our resolve to confront and eliminate those that continue to test our collective peace,” he tweeted.
One of the protesters, identified only as Emeka, told The Guardian that the protest started in the morning, and ended around 1pm, when news filtered in that the case against the director had been struck out.
“We were singing solidarity songs, and marched through the streets to express our grievance on the trial of Nnamdi Kanu. We all dispersed when news came in around 1pm that he had been freed from the court trial,” he added.
It was gathered that policemen from the Ojo, Ajangbadi, and FESTAC Area E Command were with the protesters to ensure that it did not turn violent.