SHOCKING!!! Biafra Now Has A Government Cleared By UN.... 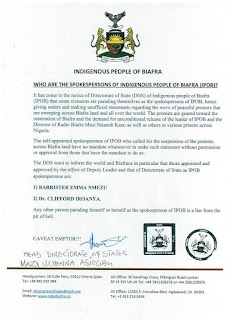 The (Directorate of states of Biafra) led by Mazi Nnamdi Kanu, and every information therein is valid and must be regard as a first class information from a reliable source contrary to the garbage peddled by some miscreants calling themselves the Elders of Biafra speaking from both sides of their mouth. Read and be guided,
We are Indigenous People of Biafra (IPOB) led by Mazi Nnamdi Kanu the true children of light, our megaphone is (Radio Biafra) and our mantra ‪#‎TRUTH‬.


Ignore anybody peddling himself as the speaker of (IPOB), the names in this documents are the real speakers for Biafra in the name of  (Barrister Emma Mizu and Dr Enger Clifford Chukwuemeka Iroanya).
God bless Biafra. Biafra: Motion in UK Parliament for Nigeria to Conduct a Referendum

The calls and protests by the Indigenous People of Biafra and other such groups, received some attention in the British House of Commons. In a motion called Early Day Motion 808 and titled Biafra Independence, Elliott, Tom moved a motion that urged the British government to support the bid for the creation of a Biafra Republic by urging the Nigerian government to conduct a referendum. The motion which was supported by Kinahan, Danny read “That this House recognises the calls for the independence of territories that constituted the Biafra Republic; acknowledges the Biafran issue could be improved with the co-operation of the Nigerian government by offering a referendum; and urges the Foreign and Commonwealth Office to use its diplomatic strength to assist in the resolution of this matter.”