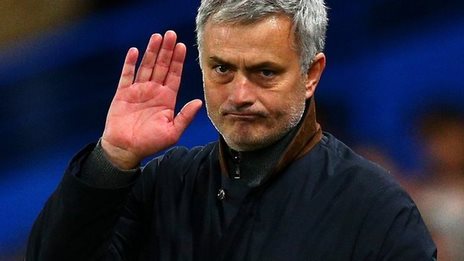 The 52-year-old Portuguese had been in his second spell at the club, taking charge in June 2013.
Chelsea finished eight points clear last season and won the League Cup, but have lost nine of their 16 league games so far and are 16th in the table, one point above the relegation places.
Mourinho's final match was Monday's 2-1 defeat at leaders Leicester City.
Pep Guardiola, Guus Hiddink, Juande Ramos and Brendan Rodgers have all been touted as possible successors as Blues owner Roman Abramovich begins another managerial search.

Chelsea Football Club and Jose Mourinho have today parted company by mutual consent.
All at Chelsea thank Jose for his immense contribution since he returned as manager in the summer of 2013.
His three league titles, FA Cup, Community Shield and three League Cup wins over two spells make him the most successful manager in our 110-year history.
But both Jose and the board agreed results have not been good enough this season and believe it is in the best interests of both parties to go our separate ways.
The club wishes to make clear Jose leaves us on good terms and will always remain a much-loved, respected and significant figure at Chelsea.
His legacy at Stamford Bridge and in England has long been guaranteed and he will always be warmly welcomed back to Stamford Bridge.
The club's focus is now on ensuring our talented squad reaches its potential.
There will be no further comment until a new appointment is made."

It is unlikely he will be out of management for long, given his record of success at Chelsea and other top European clubs.
He guided Porto and Inter Milan to Champions League glory in 2004 and 2010 respectively, then Real Madrid to the Spanish La Liga title in 2012.
However, Shearer said his departure from Chelsea "will tarnish him".
At 52, Mourinho is still some way from retirement age, but he has expressed a wish to coach the English and Portuguese national sides at some stage in his career.
In fact, he claimed he turned down the chance to become England boss when Steve McClaren was sacked in 2007.
Mourinho has a proven track record of bringing success over the short term but doubts will remain over his ability to build a dynasty.
Will that make his candidature less appealing to the kind of club he is used to managing, such as Bayern Munich, Paris St-Germain, Manchester United or Manchester City?

The Blues may be struggling at the wrong end of the Premier League table, but they are still in the Champions League and the FA Cup, while achieving European qualification is not impossible.
The key for any new manager is improving the morale of a talented squad that has underachieved this season.
Players such as Hazard, Diego Costa, Willian, and Oscar were key to Chelsea winning the league title but performances have fallen well below the heights they reached last year.
After the 2-1 defeat by Leicester Mourinho said he felt his "work was betrayed" by his players, and midfielder Cesc Fabregas has said it is time for everyone to step up.
"If you are a big player and paid like a big player, you must play like a big player and behave like a big player," said the Spain international.

What are your Comments ?
Posted by Unknown at 08:32