Biafra: Abuja High Court Also Orders Immediate & Unconditional Release of Kanu
A Federal High Court in Abuja on Thursday ordered an immediate and unconditional release a leader of pro-Biafra leader and Director of Radio Biafra, Mr. Nnamdi Kanu,‎ from the custody of the Department of State Service.
Justice Adeniyi Ademola in a ruling on Kanu’s bail application held his continued deten‎tion for about two months without any pending charges against him against the provisions of section 35(4) of the Constitution.


The judge also set aside an order granted the DSS on November 10, 2015 permitting the DSS to keep Kanu in its custody for 90 days.
Earlier on Wednesday, a Magistrate’s Court in Wuse Zone 2 of the Federal Capital Territory on Wednesday struck out the charges instituted against a Kanu by the DSS.
The DSS had applied for the discontinuance of‎ the case to enable it to file charges of terrorism and terrorism financing against him.
Justice Ademola ruled on the pro-Biafra leader case for over two months has now showed that the DSS lacked‎ sufficient material to prosecute him or had yet to make up its mind to do so.
TODAY'S PROCEEDING AT THE COURT

Judge: This is very bad. How many people died in this terror?


FG DSS: He is sponsoring a future terror.

Judge: This is new to me. He sponsored a future terror?

FG DSS: He conspired to terrorize the country.

Judge: Okay. Who are the co-conspirators?

FG DSS: He conspired with some people in USA who refused his demands.

Judge: So he did not conspire but he was having a debate about whether Igbos should arm themselves against Boko Haram?

FG DSS: you can call it that.

Judge: Discharged and acquitted. Next time bring a real terrorist and not a public opinion influencer. Goodbye. 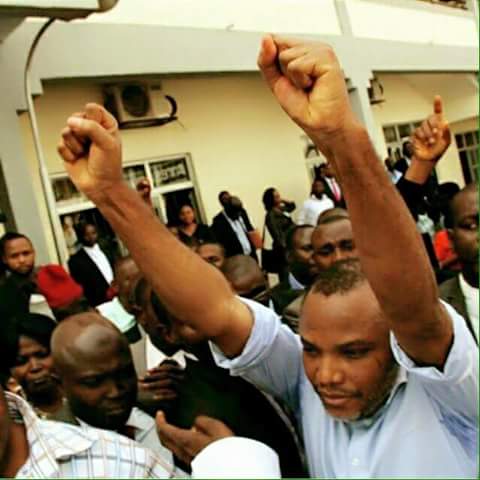