Zaria In Bloodbath-Iranian Military To Wag War Against Buhari Nigeria

A recent post by an online community has stirred panic, as the message suggests that the Iranian military might be planning an assault on Nigeria, in revenge for the Shiites who were killed in Zaria, Kaduna state.According the post by a Facebook community called the “Iran Military”, the Iranian forces are apparently preparing to “pay a visit” to Nigeria, to avenge the souls of Shiite faithfuls killed in clashes between the Nigerian army and Shia Muslims last week.

The threatening post dated December 15 made a joke of the Nigerian administration, terming it a “puppet regime”. Below is the snapshot of the post that has started generating heated arguments, sending shivers down the spine of many.

The controversial clash, which began on Saturday, December 12, and spilled on a few days more, has generated diverse reactions both locally and in the international community. There have been series of protests both home and abroad. 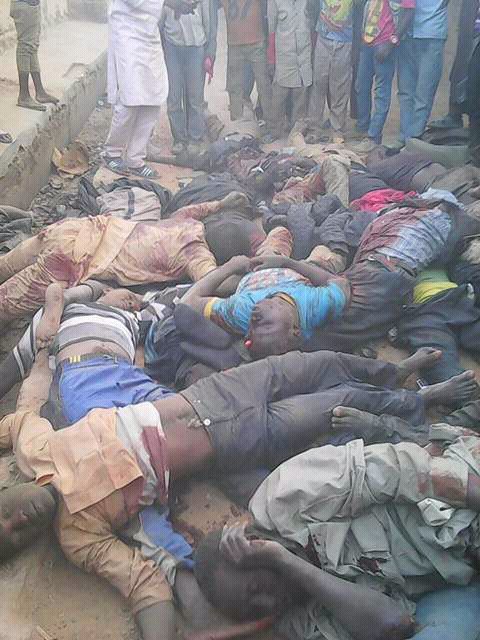 It will be recalled that Iranian officials and media condemned and expressed concern over the attack on prominent Shiite cleric Sheikh Ibrahim Zakzaky by the Nigerian military. The Iranian foreign minister, Mohammad Javad Zarif, called on Nigerian authorities to respect religious figures and rites.
On Tuesday, December 15, President Muhammadu Buhari received a call from the Iranian president, Hassan Rouhani, over the Shiite bloodbath.
Various Iranian media outfits report that President Rouhani urged Buhari to act on the issue and “not allow a small matter degenerate into a bigger one“.
Earlier Tehran summoned Nigeria’s charge d’affaires to express its outrage at the Nigerian army’s deadly crackdown. The Nigerian government was required to “immediately sheds light on the incident, treat the injured, and compensate for damages”.
The Shiite Muslims have continued to protest, calling for the release of their leader Sheikh Zakzaky. The Shiites and the family of El-Zakzaky have said that they were unaware of his whereabouts and were uncertain of his current health status.
Certain photos have been allegedly released by the Nigeria army, they show thatthe cleric is in a really terrible state.
A reprisal by the Muslim group is feared, however,  leaders of the Islamic movement in Nigeria, have listed five conditions for possible truce.
The leaders presented a catalogue of demands to the federal government, one of their major demands is the immediate release of their leader, which the Nigeria army has said is no longer in their custody.
It is pertinent to noted that the leader of the small Shiite community in Nigeria has close political and religious ties with Iran dating back to the 1979 revolution. Hence, the reason Iran and all its people are putting their weight behind him.
Opinions are divided on the recent Zaria clash, while some believe that the Nigerian army acted in accordance to rules of engagement, others believe that they massacred unarmed civilians and should have exercised more restraint rather than using lethal force.
A lot of brainstorming is still ongoing in different quarters regarding the killings, and as the Nigerians await official statements from both the government and Nigerian army regarding the rumours of war, they can only pray that their feet will not be forced to dance to the drums of war.

What are your Comments ?
Posted by Unknown at 13:07